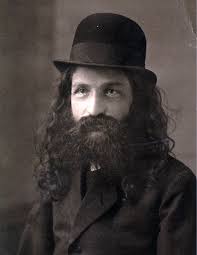 His primary student and receiver of his teaching, Rabbi David Cohen, HaRav HaNazir TZ’L was the great listener-השומע הגדול

On the morning of Rosh Chodesh Elul 1915, in Switzerland he heard Rav Kook pray and his life was transformed.

Before we ‘hear’ the many particular branches and applications of Torat HaRav Kook, it is important to familiarize ourselves with the roots and foundations of his extraordinary expression of Torah. And our best guide for that is his תלמיד מובהק-his main student. It is my pleasure to introduce the reader of this to the most unknown (except in the inner circle of the religious-zionist-mystical world) great Jewish scholar and thinker of the 20th century.

David Cohen was 28 years old when he first met Rav Kook in August 1915 in Switzerland. He came from a distinguished rabbinic family, close to the Chofetz Chayim (as was Rav Kook) and was a profound spiritual seeker and scholar. At the outbreak of WW1, he was inspired by a mekubal/kabbalist  that he met at a German prisoner of war camp (he was arrested for a month as a Russian citizen), to undertake the practice of Nazirut-no grape products, not cutting your hair-as a well as vegetarianism, not wearing leather, and long periods of silence and meditation. He did this in order to cultivate his prophetic capacities-in accordance with the teaching that טהרה-purity and נזירות-abstinence were the pre-requisities for נבואה-prophecy. He was studying for his Phd in philosophy in Germany and after his release, continued at the University of Basel in Switzerland.

Rav Kook was also in Germany when WW1 broke out  on Tisha Be’Av, 1914 -to address the rabbis of Europe about Israel and Zionism. The meeting never took place (the hand of Amalek). He could not return to Israel and spent the war years in Switzerland and England. In historical hindsight it is apparent that the Divine unfolding required that. The Balfour Declaration would not have come into being if he were not in London at the time of  its deliberation. David Cohen upon finding out Rav Kook was also in Switzerland asked to meet him. In August 1915, he was invited to  Rav Kook’s abode in St. Galen. He describes the fateful meeting in his introduction to Orot HaKodesh-The Lights of Holiness:

“After taking a mikveh in the Rhine River, carrying a volume ‘Shaarei Kedusha-Gates of Holiness’ (by Chayim Vital), full of uncertainty and expectation, I made my way to the Rav on Erev Rosh Chodesh Elul -5675-1915. I found him engaged in halachic/legal studies with his son. We spoke about Greek wisdom and its literature; which did not satisfy one who knew the sources in their origins. (He was studying Greek philosophy by reading it in Greek.) I stayed to sleep in their home. My heart could not rest at night. My life’s destiny was hanging in the balance. I awoke in the morning and I heard the sound of footsteps back and forth. (I approached  the room from whence the footsteps came.) It was the Rav praying the morning blessings, the tefilla/prayer of Akeidat Itzchak-the almost sacrifice of Isaac in a sublime supernal melody.“From the eternal high heavens, and it reminded us of the love our ancestors.” (from the introduction to Yom Kippur Shacharit prayer) I listened and I was transformed and became another person. I quickly wrote in a letter that I had found more than I had hoped for. I found for myself a Rav.”

From this moment began an extraordinary relationship between two spiritual giants. In 1922, he was invited by Rav Kook to Jerusalem to help establish the “Central Universal Yeshiva”-now widely known as ‘Mercaz HaRav’- and write the curriculum for it. He arrived in Jerusalem and basically stayed by Rav Kook’s side for the rest of Rav Kook’s life.

One day in 1925, he asked Rav Kook: “Our rabbi, there is holiness and a very unique spirit with you. Is there also a Torat HaRav? Specific content of study? A methodology?” Rav Kook answered: “Yes, certainly” and  handed him the eight notebooks that he had filled with his illuminations between 1904 and 1919 while in Yaffo (1904-1914) and  Switzerland/England (1914-1919).

The Nazir pored through these for 10 years and selected representative portions and ordered them into the 4 Volumes of Orot  HaKodesh-Lights of Holiness. He presented the galleys to the first two volumes to Rav Kook on his deathbed on Rosh Chodesh Elul, 1935- exactly 20 years to the daythey first met. Rav Kook cried emotionally grateful to know that his deepest and most precious teachings would be shared with the world.

In his introduction the Nazir explained that he identified 5 foundational principles to Rav Kook’s ‘theology’.  An understanding of these principles is helpful as a context to understand the Rav Kook world view.

Let us review them briefly:

“You live in a world full of light and life…. And everything aspires, longs, yearns, according to a pattern that is adorned with holiness and girded with beauty. This life of yours is not a meaningless phenomenon” (2:343).

“All existence is included in one point” (2:391). “The affirmation of the divine unity aspires to reveal the unity in the world, in humankind, among nations, and in the entire content of existence, without any dichotomy between action and theory, between reason and the imagination. Even the dichotomies experienced will be unified through a higher enlightenment, which recognizes their aspect of unity and compatibility” (2:411).

4. HA’TOV HA’KLALI-EVERYTHING IS GOOD After all, everything in the creation was deemed tov/good. We chose to also experience raa/bad. “And the Divine directive is to raise humankind and the world from the depths of bad to the heights of good. And humankind and the world [were] destined for this as was the bad itself…. It will be elevated and transformed to good as it recognizes that its negativity is actually directed towards the universal improvement of the good” (2:475).

In this case, I’ll introduce this principle with the quote from the Ramchal -Rabbi Moshe Chaim Luzzato (1797-1746) that the Nazir chooses to illustrate this point. The  Ramchal was a primary elaborator of the Torah of the Ari HaKadosh-Isaac Luria (1534-1572) is hugely influential on modern Jewish thought: “The worlds were created in order to rise from their level. The descent and breakage is so that we can experience elevation little by little until everything will return to its wholeness. From the beginning of history the wheel turns towards one point — ‘ha’shlemut ha’acharon‘ — the final wholeness and perfection”(Rabbi Moshe Chaim Luzzato, 138 Gates of Wisdom, 30,131).

These are the 5 foundational realities that Rav Kook invites us to integrate deeply into our understanding and resultant actions.

Imagine how our experience of life would be enhanced if we truly understand and experience the truth of these principles. How would our feelings and actions be affected? People around Rav Kook describe him as often, if not always, being in a state of bliss. He modeled for us the possibilities of a life lived in touch with the deepest and broadest truths. May we be blessed to truly live in their light quickly and in our days. 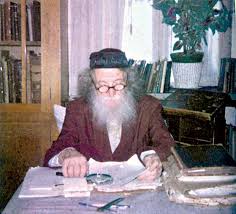 The Nazir as an elder at his home in Jerusalem (r). He was the first one, along with Rav Kook’s son Rabbi Tzvi Yehuda Kook TZ’L  brought there upon the liberation of the Kotel by his son in law, Rabbi Shlomo Goren-the Chief Rabbi of Tzahal/The Israeli Army at the time. He later became the Chief Rabbi of Israel (l).